The questions that could define Game 6 on NBA Finals. Durant abscense is a key 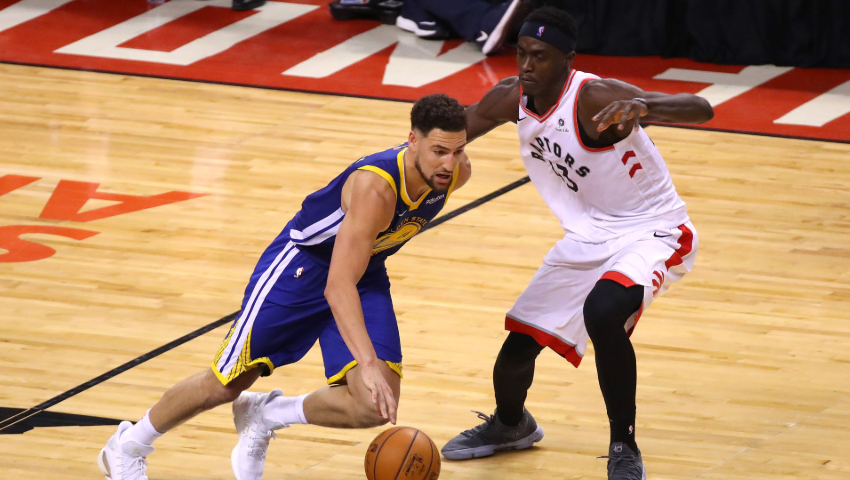 It was all but impossible, in the moments after Game 5 of the 2019 NBA Finals, to feel good about what we’d just watched. The horrific sight of Kevin Durant trying to push off his right foot, sitting down on the court, and grabbing his right heel hung over everything that followed—especially for his Warriors teammates.

“It’s hard to even celebrate this win,” Klay Thompson said after the season-saving one-point victory.

It’s understandable if Thompson and the rest of the Golden State locker room are still in that same fog three days later, with the dust still settling from Durant’s Achilles rupture. But the Warriors won’t just abdicate their throne. The Raptors must go into Oracle Arena—a hallowed gym hosting its final NBA game, and one where Toronto has a 3-0 record as a visitor this season—and take it by force. If they can’t, they’ll have to take a very long flight back home to play the highest-stakes game the sport has to offer, stewing all the while in the knowledge that they will have squandered two chances to finish the job.

Can Toronto, now heavy favorites to hoist the O’Brien, close the door it left open in Game 5? Or can the Warriors rally without their fallen star one more time to force a winner-take-all Game 7? Here are three things to keep an eye on as we get set for Thursday’s Game 6.

Can the Warriors keep springing the Splash Brothers?

Golden State survived Game 5 thanks to a 36-point edge in scoring from beyond the 3-point arc, with the bulk of that damage—12 triples on 27 attempts—coming off the flamethrowing fingertips of Thompson and Stephen Curry. Given the paucity of bankable shooting available at the moment, it’s hard to see the Warriors repeating the feat on Thursday without a similarly scorching performance.

The bad news: This time, Durant won’t be around to step out of the phone booth and allow Steve Kerr to start his best and most offensively explosive lineup. The good news: The best shooters in the world don’t need much help, room, or time to lock into a groove. Thompson, in particular, has been in one since returning from the hamstring strain that sidelined him for Game 3. He’s 13-for-23 from deep over the past two games, showing no ill effects at all from that scary Game 2 injury, and looking awfully comfortable dropping bombs in close quarters, whether off the catch after flying off a screen or working off the bounce moving to either side:

Curry showed in Game 3 that he’s eminently capable of torching a defense intent on stopping him. While Kerr’s preferred offensive prescription often features the two-time MVP operating off the ball to force defenses into giving up clean looks elsewhere, the lack of supplementary shooting threats and shot creators without Durant suggests Golden State’s best chance of getting a good look is probably putting the ball in Steph’s hands and letting him go to work. Without the size and ability to shoot over most backcourt defenders, though, Curry could benefit from a little bit of extra help to find daylight.

The Warriors are averaging 1.12 points per possession this postseason when Curry acts as the ball handler in the pick-and-roll, according to Synergy Sports Technology’s game-charting data, tops among any player to finish at least 50 such plays in the playoffs. They’ve scored at roughly the same level in these Finals, as Kevin O’Connor noted after Game 5. The most effective version of that two-man game for Golden State, unsurprisingly, remains the Steph–Draymond Green variety, the time-tested dance between the Dubs’ prime mover and primal force, which has produced a whopping 1.36 points per possession, according to Second Spectrum statistics cited by ESPN’s Zach Lowe:

Which Pascal Siakam will we see?

It’s not quite as simple as saying that the Raptors are championship-caliber when Siakam scores effectively and vulnerable when he doesn’t, but it’s not superfar off. In Toronto’s three wins in the Finals, the Cameroonian forward has averaged 23 points on 60/25/92 shooting splits. In two losses: 12 points on 33/0/40 shooting. It’s a more extreme version of a split that has persisted all postseason, one that has helped raise and lower the Raptors’ relative ceiling on a near-nightly basis.

You know what you’re getting from Kawhi Leonard; you don’t necessarily know what you’re getting from anyone else in a Raptors uniform in any given game, at least offensively. Lowry and VanVleet have had stellar outings, but smaller initiators can be muted by bigger, longer defenders. Danny Green, Finals icon though he may be, is as likely to miss seven 3s and give you a goose egg as he is to make seven 3s and give you a title. Marc Gasol has mostly shed the indecision that plagued him in earlier rounds—firing the ball when it comes his way or attacking off the catch against a backpedaling Boogie—but he’s alternated big scoring games (1, 3, 5) with quieter ones (2, 4) against Golden State.

None of those other Raptors have significant physical advantages over their opposition—the kind of athletic edge to dust a defender off the dribble, go up over the top for a clean look, or extend around a tough contest to create the angle to get the ball into scoring position. Siakam does. He’s a gazelle in transition, a whirling dervish facing up on the wing, a load in the post with a smaller defender on his back, and a chaos agent on the offensive glass. He was Toronto’s no. 2 offensive option all season, its mismatch-nightmare bellwether; when Siakam is attacking the basket and shooting with confidence, the Raptors can become unguardable for stretches.

How do both teams bounce back after an incredibly emotional 72 hours?

The weirdest thing about Game 5 was that, after Durant hobbled off the court and out of the series for good, it was the Raptors who seemed most rattled by the moment.

“Some of the guys on our bench were really shook up,” Nurse said after the game. “And I even know at halftime, when they came out and I don’t know what the official word is, but somebody on the bench said, ‘He tore something.’ And I know Kyle was on the bench, sitting there, and was shook up by that, and both Klay and Steph stopped and talked to Kyle there at halftime on our bench about it. So I think it’s always a little eerie feeling for everybody when something like that happens on a big stage like this.”

When Durant exited, Cousins—who at that point seemed ticketed for a DNP-CD—checked in for his first action of the game. His physicality and touch seemed to catch Toronto off guard, as he scored seven straight points to key a 13-4 run that put the Warriors up double figures.

Golden State and Toronto each have plenty of veterans who’ve seen an awful lot in their careers—who have battled, won, and lost on the grandest stages the sport has to offer. Neither side figures to be shook by a big moment. But then, thismoment feels different—bigger than most. Who’s going to blink first? A championship could depend on the answer.