Last week we took a journey through a few of the emerging trends from the top two divisions in Germany as we sought to understand a little of how football might have changed since the move behind closed doors. We’ve had another round of fixtures since then, with Portugal now well underway, a handful of games played in Greece last weekend, and now the return of both La Liga and Segunda in Spain.

As a result, with a larger sample, our initial hypotheses are now being more confidently proved or disproved, and it’s time to turn our eye to the Premier League and ask ourselves how these trends might affect things in the final few weeks of the English domestic season, and where we might find some angles to consider against the bookmakers.

Home advantage has been eroded

There is now a wealth of evidence to support that our initial theories that soulless empty stadia would make playing at home less advantageous. Home win % has dropped through the floor, there's been just eight home wins from 46 Bundesliga matches since their restart, and the under-laying metrics also support this strongly.

Goals scored by home sides have averaged just 1.28 in Bundesliga – more usually they would be around 1.75. Away goals have been more prevalent as well, where we’ve witnessed a rise from 1.5 goals on average to 1.74. With shots and shots-on-target demonstrating similar trends, the evidence is certainly strong that hosts are not enjoying their usual advantage.

Arsenal might enjoy a lucky break. While they still need to play six away matches, it would have looked impossible for much of an upturn in fortunes before. Now perhaps they could sneak back into European contention. They will certainly be more optimistic about trips to Wolves and Spurs for example.

Sheffield United are another who would have had an uphill battle at the end of the season. They will now be more at ease with trips to Man United, Leicester, Southampton and Newcastle. Any one of those matches could prove pivotal in their ambitions of a Champions League spot.

It’s generally bad news for those sides who are struggling in the relegation zone.

Aston Villa are probably affected more than most since they’ve lost much of the edge they would have enjoyed from six home matches, with then just four away games left. Only one of their last 10 matches come against a bottom-seven side as well, which makes things increasingly difficult.

With five home games - notably against Burnley, West Ham and Brighton – things are looking much harder for Norwich, who are relegation certainties now. Their away matches give little cause for hope either as they still need to travel to Arsenal, Chelsea and Man City.

Bournemouth are another who have lost an important edge – five of their final nine matches would have seen them enjoy a full home-advantage, and that could prove crucial as they host Crystal Palace, Newcastle and Southampton. With a bunch of really tough away matches I am now fearing for the Cherries.

Both Watford and West Ham have lost the home advantage of five of their final nine games, but, along with West Ham, will probably be happy enough given they have to play away at Newcastle and Norwich, while Watford still need to go to Burnley and West Ham.

Corner counts are marginally down 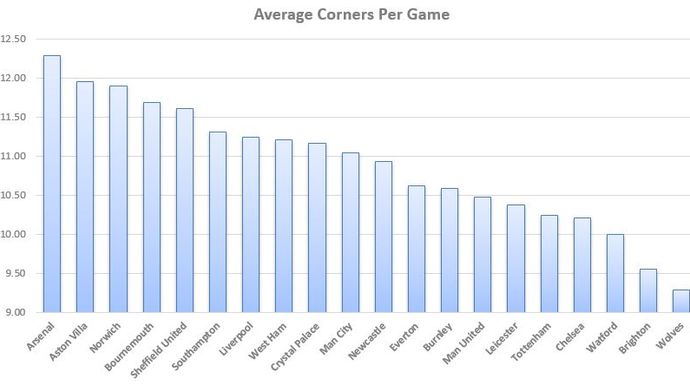 We’re seeing a small but important trend in corners, which could open up angles for stats-based punters. Bundelsiga (10.2 down to 10.1), Bundesliga II (10.4 down to 9.7), Greece (9.2 down to 8.5) and Portugal (10.4 down to 9.5) have all seen a decrease in corner counts. While in the case of Bundesliga it’s extremely modest, the drop in other divisions have been significant, and the combined numbers suggest corners might be down around 5%.

From the sample of 109 games I looked at, we’d have expected around 1,118 corners so far, while the observed number was just 1,065. If you’re a 'corner handicapper' or 'most corners backer' then it's also worth noting that almost all the under-performance came from the home sides.

Where will the value be? 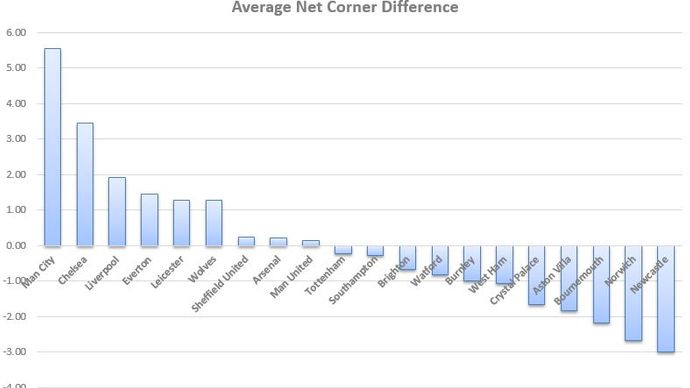 With home corners down, and away corners remaining steady, it could be worth looking to support sides such as Man City (+5.54), Chelsea (+3.44) on the corner handicap when they play away, or oppose sides such as Norwich (-2.65), Newcastle (-3) or Bournemouth (-2.17) when they play at home.

Finally, the absence of a crowd has had a material impact on how referees go about officiating things. Pre-covid we’d seen Bundesliga sides pick up 19.2 booking points (10 yellow, 25 red) on average when playing at home, and 24.9pts away. Since the restart it’s been 26.2pts for home sides, and 24pts for away sides.

The Most Cards Market is where we’ll most likely find success. Typically I’ll be looking to back the bad-boys of the game at home, who might previously have been given the benefit of the doubt.

There’s clearly something in the water in North London with Arsenal, Spurs and Watford all topping the table. Liverpool and Leicester are the most disciplined sides in the division. I’ll be looking to back the bad-boys to pick up most cards when they play at home to the well behaved sides.

More tips
duckduckgo42.9% WR-2.67% ROI
6 часов назад
1.52Both Teams To Score - Yes
Borussia Dortmund vs Borussia M`gladbach|Germany. Bundesliga
Borussia Dortmund vs Borussia M`gladbach|Germany. Bundesliga
😯 The first round and already a top match! The Bundesliga does not take time to build up, but immediately gives us one of the most interesting matches already in the first round!

Considering Holland and Sancho, as well as players like Thuram and Plea, I ****** both teams will succeed in their attacks and score some goals ⚽️ ⚽️ ⚽️

7
3
Repeat 1.52
Judesėlis Pagrandukas57.4% WR-0.6% ROI
8 часов назад
1.7Over 2.5 Goals
Arsenal vs West Ham United|England. Premier League
Arsenal vs West Ham United|England. Premier League
Arsenal and West Ham meet on Saturday from opposite ends of the confidence spectrum – and we expect that to be reflected in the final score at the Emirates this weekend.Fresh from a resounding win at Fulham, the Gunners will have a kick in their step, and armed with the momentum from a nine-match unbeaten run at home, as well as their recent FA Cup and Community Shield triumphs, the hosts should cruise to victory this week.Arsenal beat the -1.0 handicap in five of their last eight home encounters against West Ham, and with Aubameyang, Willian and Lacazette already showing signs that prolific partnerships are on the way to being forged, another meaty win against the Irons looks on.With that considered, it’s worth backing Over 2.5 Goals
1
0
Repeat 1.68
PrevNext